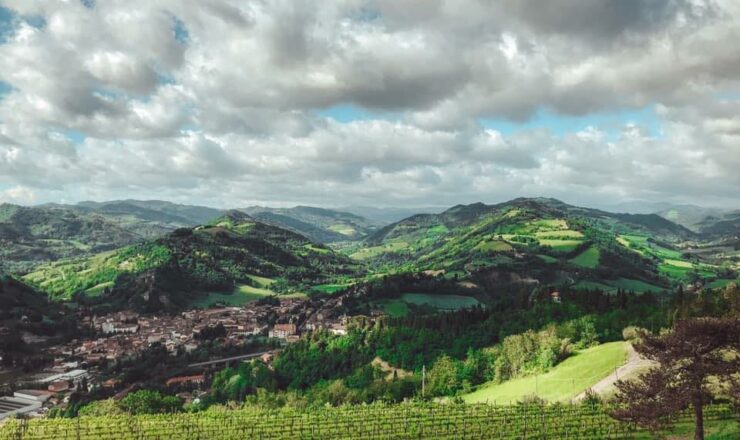 Over than 180 km of ring tracks that start from the center of the town and cross the three valleys of Tramazzo, Ibola and Acerrata, between wild nature, history, art, food and wine.
The territory around Modigliana, thanks to its strategic geographical and morphological location, has made the town a very important nucleus over the centuries.

Here you can learn about the Guidi Counts, the Garibaldi branch, the art of Silvestro Lega and the Silk Industry, Maria Stella Chiappini and the relations with the House of Orleans, the partisan history, the recent development of industrial design, the excellence of wine and the experimental reserve of Montebello.

The landscapes of the three Valleys of Tramazzo, Ibola and Acerrata are just some of the elements among which the municipal administration wanted to weave a “fil rouge”. A line capable of finding coherent narratives that can tell with simplicity the great heritage of Modigliana.
The history of a territory is the continuous coexistence and interaction between places.
There’s no wine without vineyards, no history without relationships, no Cathedral without parishes.

The Agro-urban Paths want to create physical experiences of the territorial tales through thematic tracks, which allow you to explore the all territory. They create a link between businesses and place of the town center and those of the surrounding agricultural territory, through a simple and slow gesture such as walking.

In 2021, the network of trails consists of 9 ring tracks, each one with many under paths, that depart from the town center, for a total of over 180 km of tracking.

For each route have been identified specific themes and narratives and have been also marked the points of historical, naturalistic and gastronomic interest. Each ring has been tracked by GPS and the tracks can be downloaded from the web site. All the paths can be covered on foot, on bicycle or on horseback