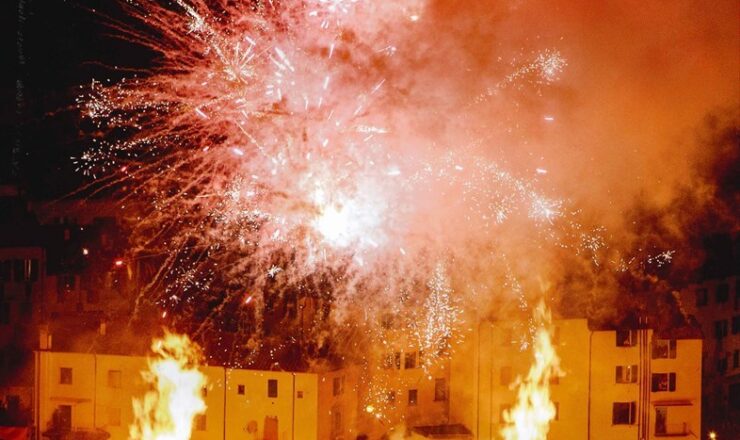 The magical night of Rocca San Casciano: that is exactly what may be termed The Festa del Falò

that takes place during the spring, in this municipality of Tuscan Romagna.

This is one of the oldest traditions of the territory tosco romagnolo: an event by age-old roots that sees two districts, the village and the market, in the race to build the biggest bonfire. Even today, the entire community of Rocca San Casciano gather along the banks of the river Montone, to remember their own traditions. The most impressive moment of the event sees around 20 boys, each neighborhood, go around two giant haystacks and put the flames of torches, previously blessed in Church, for ignition. Is now focusing all efforts of months of work, strategies and studies.

Are the speed and the height of the flames the deciding factors for the most successful ignition. This party does not expect nor the presence of a jury, or the awarding of a prize to the ward winner: will be discussed for months in the squares of Rocca San Casciano and each, in its own small, will know which bonfire got the show more exciting.

Once the preparation of these haystacks was dedicated to San Giuseppe, to promote good crops, or to dissolve the votes and get a pardon. But as well as it used to be, even today, the symbol of the Festival remains the fire, combining, warms and weld the ties within the community.

The party has evolved over the years and has been enriched: in 1700 the only attractions were the two haystacks that burned, while today the event includes also a Grand firework display that immerses viewers in a truly magical atmosphere .